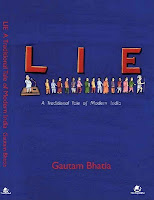 Architects are different from most navel-gazing comic book artists in one big way: they are into creating blueprints that will alter the backdrop of our lives. That Gautam Bhatia is an architect offers insight into the ambitiousness of his debut graphic novel. The introduction of Lie: A Traditional Tale of Modern India, formatted into twin towers of dense, all-caps text, says that the book is meant to 'act as a form of corrective measure to the real India, offering a set of unintellectual lenses behind which lies something of today’s morality.’

Lie has the vision of a town-planner, the robust and infectious self assurance that is prerequisite to rallying together a workforce that will transform – not a mere page, not a mere wall, not a mere living room – but the skyline of an entire city.

In the presence of those scant literary commodities, audaciousness and idealism, a very special responsibility lies with the reviewer. Particularly when the genre is a budding one, and the author has been brave enough to experiment with form, one needs to be careful lest an original voice is crushed underfoot in excessive manicuring of gardens. Lie has audaciousness and idealism covered. This, then, is a fable of ‘armless beggars, conspiring bureaucrats, demented politicians and crooked businessmen. Of meetings and seminars with no express intent, riots and conflicts that refuse to abate, political debate that stirs no one, grandiose intentions that serve no purpose’. Critics point out that the subject matter echoes Bhatia’s earlier work (Whitewash, Punjabi Baroque). In his defense it must be said that with concerns that are so immense in scale, what better can a sincere flag-bearer do but keep honing his message till it cuts through the drone?

To retell this traditional tale of modern India, Bhatia’s new medium of choice (he has authored essays, fiction and non-fiction before this) is the graphic novel. He is in august company here. The graphic novel has fast become a popular medium with left-leaners, ecological warriors, travelling birds and political beasts the world over (Maus, Barefoot Gen, Pride of Baghdad, Persepolis, Safe Area Gorazde, Pyongyang, Kabul Disco) – not to mention, with journalists who have more to say than newspapers' word count will allow. Even in India, where graphic literature is a very nascent genre, a significant number of titles have strong socio-political or ecological undercurrents (River of Stories, Kashmir Pending, The Believers, Delhi Calm, Our Toxic World).

Lie steers admirably clear of borrowing existing conventions of structure and visual grammar (as defined by Franco-Belgian, North American or Japanese traditions). The author collaborated with Rajasthani folk artists Shankar Lal Bhopa, Birju Lal Bhopa, and Ghanshyam for this project – teaming his trademark satire with kitschy visuals that reference miniature paintings. Bhatia has a wicked ear for the language of government tenders, legal banalities, obituaries and birthday eulogies of the sort found in small-town newspapers – albeit with the occasional tendency to go over the top. The pokerfaced artwork (reminiscent, in sensibility and form, of truck art and Ambedkar statues) complements, and offsets, the hyperbolic text to quirky and delightful result. Bhatia creates a webbed narrative featuring a gamut of droll, disturbing stories about lusty, wheeling-dealing, power-mongering – or doomed – characters. The book is hard to read at one stretch, but this is not necessarily a bad thing. It joins the Holy Bible, Eduardo Galeano’s Mirrors and Dave McKean’s Cages among the books that will sit on my bedside table to be dipped into and savoured over months of re-reading. This is rare –most graphic novels can be hurtled through at breakneck speed and safely put aside forever.

Orchestrating a balanced graphic novel, though, is like walking a tight rope. A successful marriage of word and visual needs more than the juxtaposition of competent writing and competent artwork – one cannot overemphasize the importance of face value. In the hands of those with a Message, the graphic novel format runs the continuous risk of buckling over from top-heaviness. Excess content makes the fine membranes of case, speech blurb and page stretch to breaking point. No publication (with the possible exception of coffee table books) needs more exacting production standards than a graphic novel does; or suffers as grievously from a lack of nitpicking.

Comic book scholar Thierry Groensteen observes in ‘The System of Comics’ (University Press of Mississippi, 2007), “When watching a film, the cinema spectator does not experience the sensation of being placed in front of a multitude of narrative utterances that accumulate piece by piece to give birth to…the entirety of the filmic story. The comic book reader, on the contrary, experiences precisely a sensation of this type.”

Too many cases per page can undo the experience, as can insufficient ‘breathing room’, incoherent visual flow of text, careless choice of typeface, narrow margins, unwieldy binding and wrong paper selection. Surprisingly (since the book lists four names in its design and layout credits) the publishers of Lie could have done better on all these counts – the ink-guzzling matte paper has robbed the visuals of their jewel-like colour, the font selection is questionable, and the binding gave way in my second reading of the book. Girders too weak to support its imposing superstructure, Lie flounders because of faulty design.

All these things can be fixed in a future edition or a future work. More worthy of investigation is the nature of collaboration between Bhatia and the three artists. In an interview with DNA (April 11th 2010), Bhatia explained, “ I wanted a graphic style that can pack in a lot of information and detailing in one panel. The miniaturists are known for this…I ended up sketching some of the drawings myself eventually and then got them to improvise. They had never worked on a graphic novel before. I had to convince them to draw frames that showed movement.”

This could pass off as an innocuous planning detail – many a writer does actively engage with the artist in the storyboarding process – but it takes on a different significance when you consider the distinctive art form that the artists Bhatia collaborated with, are well-versed in.

While reading Lie, it is a cinch to identify panels where the artists are in their comfort zone, and where they aren’t. Hastiness and lack of detail marks certain visuals and seems to be at odds with the meticulous sensibility of any of the various Indian schools of miniature art (this probably has something to do with the large number of images a graphic novel demands). Alien visual devices (such as foreshortening and perspective) imposed upon a traditionally ‘flat’ art form make for some stiltedness. There is, too, a palpable awkwardness in the matchbox-sized continuity panels that feature close-ups and don’t offer the artists an opportunity to work in any whimsical details, backgrounds, or landscapes. One wonders about what the three artists (conspicuous by their absence at the venue of the book release), whose work usually deals with imagery from the Mahabharat and Ramayan, felt about the scores of raunchy images and pop-references commissioned for Lie. Do they see the book as a celebration of their work, or as a subversion of it?

The strongest pages in Lie are the ones where Bhatia allows the artists run of the space – the banquet hall and conference room scenes, the cross section of the aircraft, the chillingly beautiful double spread depicting farmer suicides – and uses text sparingly. Interestingly, it is these very pages where Bhatia’s prose most effectively and confidently shines through. One longs for more open courtyards in Bhatia’s work, more visual respite, a script that was written for a graphic novel rather than adapted to become one. One also longs for more adventurous books such as this one.

This review was written for the August 2010 issue of Biblio