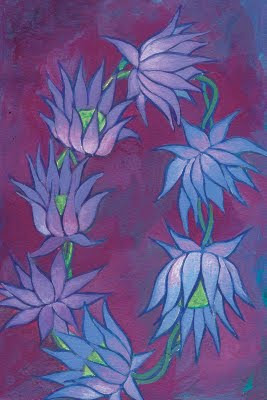 Durvas gave Indra a garland that would never wilt.
In a moment of insolence, he tossed it aside. | Adi Parva © Amruta Patil 2011


15th July was Guru Poornima, day to honour the teacher. If I stand upright after that shaky start in Smog City (and all it brought), it is because of the grace of teachers. Prashant Trivedi's early intervention about right occupation, attitude, speech. Rumi's lesson in loving the Shams-Sun with joyful abandon. Chögyam Trungpa's luminous teaching about queenly posture and the warrior's path. Shantideva's Bodhicharyavatara. Meera's gentle fearlessness in the face of vicious, mocking others. The efforts of countless scholars and unlettered storytellers in rowing lore to present-day shores, thereby opening a sealed vault for the rest of us. Kabir and Raashmi, real-time kalyanmitras who helped side-step muddy puddles. I give thanks for not being abandoned despite wandering off course so often.

Been reading Debroy's translation of the Vedas. The Vedas are eat-humble-pie bootcamp: Unclog thy miserly mouth, let praise flow for the worthy instead of flowing for those that mirror one's impoverished standards, or are only marginally better than oneself.

In an übercasual age when no one seems to merit appropriate posture or well-enunciated greeting from another; rivers of self-effacing praise are an absurdity and irritant. I am repeat-offender, having held onto a deluded view until recently: that beings who don't keep the Individual in solus position are like Stepford Wives. (Ironically, it is individualists that most often dismiss the Bodhisattva aspiration as being impossibly arrogant. Lofty goals being the irritant in this case, I suppose. Euthanize the unicorn. Desaturate the rainbow.)

Critical shift happened on being allowed to see that praising the Sun, Water, Cow, or Herb has nothing to do with pampering their sense of self; and everything to do with putting one's own touchy, bloated ego in its correct place - i.e, underground. Amn't doing anyone but myself a favour by learning to bow. The absurdity of imagining that the Sun has anything to gain from clumsy human odes and prostrations!

We have been busy accumulating solace.
Make us afraid of how we were.
~ From Jalaluddin Rumi's 'The Core of Masculinity'
Posted by amruta patil at 2:30 AM

In the title of the pic, isn't 'Durvas' intended to mean 'Durvasa'?

@ Indisch: The surplus 'a's added at the end of Sanskrit names and words were used, at the outset, to transliterate the short 'a' sound (like half an 'a' sound, if you know what I mean), but people have started reading it as an 'aa' sound. Ending up pronouncing what ought to sound like 'Ram' as 'Raamaa', and 'Krshn' as 'Krishnaa' - leading to unintentionally funny gaffes ('Krishnaa', for example, is another name for Draupadi). Seems like a good idea to just revert to authentic Sanskrit sound instead of colonial era distortions.

OT: But god! how I love that Krishna Meera image - it was always one of my favourites and I am ashamed to say, I have never noticed who drew it.

(Incapable of spelling names without the 'a' at the end. Always calls to mind some Delhi-type twisting names up. On the other hand, always remember my Indian philosophy prof in college scrupulously pronouncing names the way they should be pronounced. She was a Tamilian. :-) )

Yes, I totally get what you mean. It's much similar to the 'raag'/'raagaa' conundrum. Isn't there a way to put forth this 'half sounding 'a'' somehow? Maybe by way of putting a dot over it (rather than doing away with it completely)? If there's no 'a' at the end it seems as if there's an abrupt stop (indicating the invisible presence of a 'halant').

Spacebar: The illustrator is a fascinating one. Yusuf Lien, who now goes by the name Yusuf Bangalorewalla is supposed to be quite reclusive, has denounced his own mythology-related work, and given up illustrations of the human form since. Wrote him an effusive mail some years ago, it remained predictably unanswered. Later, online serendipity, I came across a photo of a young woman who was Lien's daughter, and it was a little Moment, "So the face of Meera - and Krshn - is your mother's!"

Amruta, 'I' have passed on your thanks to Ved Vyas/ Ganpati Bappa!
Happy to know you liked 'my' loud thoughts!
Happy Raksha Bandhan to you!!!

And to you too. Is saal raakhi Brihaspati ke charnon mein rakh di :)

How appropriate that 'swarg' is also known as 'svarlok'.

The 'wise' ancients, our predecessors, attempted reaching the Absolute Truth or the formless Supreme Being who, perhaps, seeks its origin.

That's why Time (under Mahakal Shiva as the controller of Time, though Himself/ Herself/ Itself believably being related to time and space Zero) is supposed to be reviewing eternally the Creation from the perfect stage to the imperfect stage as it might have existed as pure energy in the beginning, (Infra Red, the pure heat that is exchanged between galaxies?),,, and thus concluded that He is unborn and unending?...

The eternally unanswered question is: Who am I? Has someone brought me here? And, if so, for what purpose? For 'myself' (as 'I' am given to understand), or for 'its own purpose' unknown to humans?

wow so profound!.. I wonder what The 'guru' feels on Guru Purnima with all the praises and offerings - bloated ego or immense gratitude or indifference.

:) If s/he isn't a misguided and insecure shepherd, the guru well knows that the praise and offerings are not to their fragile human *self* but to what they channelize and represent. But that said, there are a lot of misguided, insecure shepherds leading matching sheep.

Yup. I fancy that 'guru' might not necessarily be a person...it's in the air..the epiphanies ,the truth that rises from the heart.in that case we only have to thank 'the sun /water/ herb'.
Guru Purnima then celebrates the overflowing gratitude of the seeker rather than a ceremony centered around the guru. :)

Guru or Superior attains importance on account of the apparent hierarchy in Nature, ie, the temporary physical world, which continues to undergo change with time, eternally... that has, in fact, been generated by Vishnu, the Nadbindu, the one and only point source of infinite energy, the 'Black Matter' (Krishna), that fills the entire infinite sized void of the ever expanding balloon-like universe, which could be imagined as the Big Zero... That is, 'Brahmand', literally the 'Creator's egg', to wise ancient Hindus...

Thus conveying the concept of the unborn and unending GOD, ie, 'Param Brahma' the formless GURU of all Gurus in physical forms!