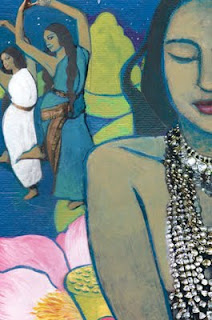 Indian mythology shows us that a point is driven home with a disarming nudge, not by applying a club to someone’s head.

One needs to pick one’s causes. And when the corpus of work is as infinite as it is, infinitesimal in detail, you find yourself winnowing and sifting on a moment-to-moment basis. There was the matter of areolas, for example. The areolas of apsaras, to be specific, and whether they should be depicted at the risk of a future book bonfire fuelled entirely on face value; or whether the areola ought to be covered in cascades of hair, safeguarding the book for the present, allowing the audience to be carried along to the next threshold, one of ideological concerns. Of such continuous, subtle manipulation is the work of a communicator made. Thin line between the editorial and the censorial. It is amply clear that in a country like India everything is as infinite as it is infinitesimal, in both rule and exception — life for upholders of the law must be an endless array of areola-debates — the latest, highly nebulous conversation about freedom of expression being among them.
The kind of ‘freedom of expression’ most people seek (and defend) could, in fact, be renamed ‘freedom to rant’. Which means, “I will say what I want to say, whether you are listening or not, whether it makes sense or not, whether you understand or not, whether it interests you or bores you to tears.” A legitimate demand, of course, and one that must be served — as long as one doesn’t count on there being any audience. Interestingly, the people who rain down on the ranter’s parade are the yin to their yang, complementary match on the colour wheel, their perfect counterpart on the other side of the wall. The ranter’s opponent, it turns out, is also a ranter — often strident, sometimes retired, with ample time to file (and follow up on) court cases. “I will oppose you whether I fully understand you or not, whether I have read your work or not, whether your enquiry is genuine or not, whether you have homework in place or not, whether I have my homework in place or not.”

Two disclaimers we know too well, but must remind ourselves about anyway: 1. Entrepreneurs who put a gag on freedoms are almost never ‘the masses’. The masses keep it real and close to home; have little time to visit gallery, literary fest or bookshop; and even lesser time to harbour deep-seated resentment of the sort that will turn into sticks and stones that break people’s bones. My aunt in Vikhroli, for example, has been known to hold a grudge or two, but it is seldom ideological. She is the 99.99 %

2. Artists who really don’t give a deuce about what people think of their work normally do not share it except in personal journals, or on the walls of their cave. Let us not fool ourselves; there’s nothing humble about wanting to broadcast oneself in a public space (which is okay, because a healthy sense of self does facilitate a bunch of things). In the same breath, there is nothing egalitarian about art — never was, never will be. This business of a paintbox in every room, and a podium for every human being is historically unprecedented. Historically, art has been commissioned for extremely specific reasons, for extremely strategic (and mostly elite) audiences. If you are going to go Lowest Common Denominator and suspend yourself publicly from a windmill, the least you can do is come dressed to deal with a draught of cold air on your derrière. Someone’s going to love the work, someone’s going to choke on it — and make whatever choking sounds they want to make, while they’re at it.

Marge Piercy summarised it tidily in the poem For The Young Who Want To: “You have to like (the work) better than being loved.” A small percentage of people come to the freedom of expression debate with higher stakes, sometimes a body of thought and work behind them. They are, bless their lion hearts, beacons of light on a horizon of bleakness: social commentator, educator, activist, agent of change; and they’re understandably reluctant to be pushed to the wall by someone whose only argument is, “Nya nya nya nya nya! Not listening! Go talk to the Hand that is Clause 2 of Article 19(1)(a) of the Indian Constitution.”

There used to be the fine tradition of shaastraarth, where people of different points of view gathered, not to pluck one another’s teeth and eyelashes out, but to discuss and clarify ideas. The obvious drawback of shaastraarth is that it presupposes that the people engaging in it are equals. If that weren’t logistically hard enough to arrange, they must be equals who have the time and inclination to listen, reflect and return to the discussion; and not be hastily moderated into 15-second sound byte gunshots for live television.

Rather than lamenting the predictable woes of the gagged, it is worth rowing to the other shore of freedom of expression. It is known as the Responsibility to Say Things in Such a Way That People Actually Understand What The Fuck You Are On About. School teachers know exactly what this is: the great and terrifying responsibility of standing in front of 50 fidgeting children, wanting every one of them to lend you their ears and minds willingly. If your job is that of a guide, you had better speak in a language your wards understand, and you had better have it in you to beguile them into staying awake. Oh yes, it’s a hard job, charming the socks off people. Lot harder than the job of stuffing them into a sack and sitting atop it so they won’t wiggle.

Mythologist Devdutt Pattanaik made an astute observation about how, every time we open our mouths, what spills out is the language of war and violence. We lapse into it unquestioningly, while speaking of the most innocuous things: deadline, crossfire, shellshock, ammo, siege, blitzkrieg, cutting edge, annihilate, decimate. Slapping a lawsuit on someone, crushing opposition, thrashing out the matter, going for the kill. If it’s a battle we anticipate around every corner, it’s worth holding onto one of the Top 50 Latin phrases in an IB student’s checklist of impressive devices: Inter Arma Enim Silent Leges. In times of war, the laws fall silent. If it’s a battlefield you’re traversing, rest assured you won’t get what’s rightfully yours until something’s bleedy or dead. Freedom of expression will be casualty #1. You may be casualty #2.

There is an occupational hazard with my work: one can’t stop bleating in parables. Myth is the lens through which the world is processed. And it isn’t as simplistic a lens as the children of Logos would presume. (On the contrary, some of the most passionate connoisseurs of the Indian myth I have met are not fellow artists, but people in the fold of law, policy-making, business). The Indian subcontinent is one of those rare places where old stories weren’t effaced when a new regime brought in new lore. The mythology that exists, thus, is truly distilled from the wisdom of the multitude. Far beyond the purview of a single-author project. And it is this mythology that repeatedly urges one to make a switch from ranabhoomi to rangabhoomi, from battlefield to playing field. A sweeter terrain, where a point is driven home via disarming nudge, not by putting a club to someone’s head.

As someone who spent a better part of her youth harvesting gravitas and a patently useless burn-your-retina intensity, I’ve come to the playing field rather late. And I am grateful I made it here at all. In the lore I swim in, the headquarters are led by an androgyne with a permanent smile and a lotus growing out of his nombril. The only things there’s no room for in this multiverse are bores and bigots. The mad man on the fringes may have been laughed at, but he was never institutionalised — what if he were the wielder of some atypical crazy wisdom? The colour palette inside slowly changes. How could it but spread its vivid tint to the outside?
~
This essay appeared in Tehelka (February 18th 2012) as part of the ongoing freedom of expression debate. Image above from Adi Parva © Amruta Patil, 2012
Posted by amruta patil at 1:22 AM

Erm.
I totally get your point about langauge. I'm trying to detox it for my characters in Antisense, who live in a world that went through the ultimate war and rebuilt themselves on the other side.
But for the areolas, i may humbly offer a solution. The ancient peoples of India liberally used body paint of sandalwood paste, with which they would draw designs on themselves. It sets to an opaque tan-coloured crust, and I suspect was used as a kind of removable 'wardrobe'. It still forms a part of wedding makeup. My guess is the apsaras would use something like that on their areolas.
Wonderful work. Keep em coming, they are awesome. Can't wait to read the final book.

Trust them to have innovated so the wardrobe wasn't just removable, but was incredibly fragrant, and water-soluble as well. Nice.