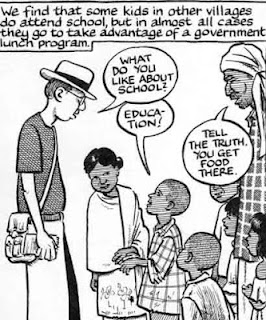 In an era of celebrity and quick turnabouts aimed at staying in public memory, Joe Sacco is determinedly low profile. When he isn’t on the field chasing a story, he’s bent over a drawing board in Portland, Oregon, in America. And in an era of screaming reportage whose shelf life is less than 24 hours, Sacco is dogged in his commitment to “slow journalism”, that rare art of allowing insight to percolate over time through carefully-observed stories.

Sacco has been anything but complacent in his career. His Safe Area Gorazde and Palestine pretty much birthed the genre of war reportage in graphic format and have inspired a whole generation of storytellers ranging from Ari Folman to Sarah Glidden. But, for the author, the books were no overnight success story. Palestine, for example, first appeared in print as a series of nine short reportages in comic form before it was compiled as a single graphic novel (Sacco professes a discomfort around the term). His latest, Journalism, has been a slow-percolation project too: an anthology of short graphic pieces created for different publications between 1998-2011.

Over the years, Sacco seems to have acquired a clearer sense of the great responsibility that comes with the great power his work wields. The easygoing ‘journal-style’ (seen in Palestine and Notes from a Defeatist), so popular in the 1990s when Sacco started off, has been traded in for greater precision and journalistic rigour. The artwork, drawn from extensive photo documentation — Sacco finds sketching on-location intrusive — and always teeming with detail, has become even more nuanced. Jumpy case arrangements have made way for quieter layouts. The text is now obsessively annotated. This textual detailing has brought Sacco appreciation as well as flak; the latter most notably from his hero R Crumb, who feels that the citations and footnotes get in the way of effortless storytelling.

What has remained unaltered is the narrator’s presence in the stories. Sacco has openly balked at popular catchphrases such as ‘objective journalism’; a point he reiterates by visually placing himself — rather deprecatingly — within his stories as the rubbery, toothsome non-hero whose eyes are inscrutable behind spectacles. In the introduction to Journalism, Sacco talks about the notion of “removing the self” from reportage: “By making it difficult to draw myself out of a scene, (the inherently interpretive medium of comics) hasn’t permitted me to make a virtue of dispassion…it has forced me to make choices.”

Unsurprisingly, the weakest links in the anthology are stories where the Sacco-within-the-story takes a backseat (‘The War Crimes Trials’) or disappears entirely (‘Hebron: A Look Inside’). Both these stories also happen to be rendered in colour — something that detracts from the pristine black and white and cross-hatched style that defines Sacco’s work.

The test of a storyteller’s gaze is in how completely unfamiliar terrain is perceived and processed. It is to Sacco’s credit that he manages to retain an unblinking, unsentimental — yet empathetic — gaze while viewing the gun-wielder and the shot-at alike. In Journalism, Sacco doesn’t miss a beat as he shifts his gaze from his familiar beat, Gaza, to Iraq; to the women in refugee camps in Chechnya, illegal African immigrants in his birth-country, Malta, and the wretched untouchable community of Musahars in eastern Uttar Pradesh. 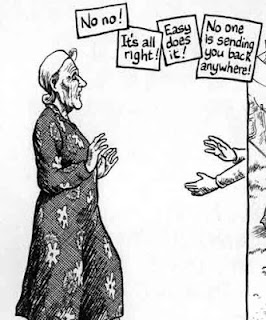 The anecdotal richesse that gets sifted out of newspaper reportage often contains the richest topsoil of a story.The ability to encode these details, non-verbally, within a concise space is what gives comic-form reportage its edge. Not to mention the luxury of reflection and presenting both point and counterpoint in the same narrative. What a newspaper story can only hint at, a graphic story can unfold in cinematic glory. This is evidenced in the magnificently-told ‘Chechen War, Chechen Women’— from its first illustration of an older woman in the foreground, her arms thrown out, crying “I’m not going back to that place!” to its dénouement with another older woman holding onto a yellowing family photo almost for dear life.

In ‘The Unwanted’, one of the finest stories in the anthology, the microcosm of Malta encapsulates Europe’s immigration anxiety. Every year, large numbers of African refugees, crammed in small Europe-bound boats, end up washing ashore on the island of Malta — Sacco’s birthplace. Sacco chronicles both the desperation of refugees fleeing conflict in their native countries and the well-intentioned but frustrated efforts of the Maltese to accommodate these swelling numbers on their tiny island.

Sacco’s most striking achievement lies in showcasing not only the terrible face of war and displacement; but also its other face —the banal, the giggly; the undeniably human, even humane.
Christopher Hitchens famously referred to Sacco as “our moral draftsman” — an epithet that Sacco has, thus far, managed to carry conscientiously, and without a moral high horse in sight.

This book review appeared in DNA on 9th December 2012
Posted by amruta patil at 10:45 PM