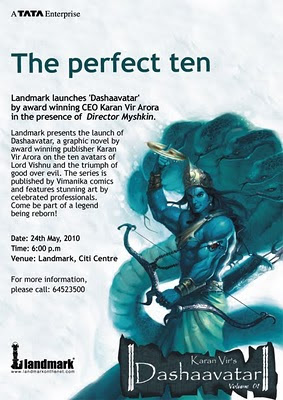 Thank you, JP, for drawing my attention to this horror. And for pointing out its shameless resemblance to *this*. Face of unmitigated evil, that 'Vishnu' above, with 'Anant Sheshnag' hovering behind him like the hood of death itself. I hope, without much conviction, that what lies inside the book is an improvement over this artwork. If it isn't enough that so many of us (including yours truly) keep regurgitating the timeless, increasingly we kowtow to the 'glorious aesthetic tradition' of DC Comics and video games. How else, in most peoples' programmed minds, can strength and control be depicted? Finding - and retaining - a honest visual/verbal voice is such a nonstop test of courage and conviction.

In contrast with the image above, here (image below) is sweetness itself. I'd trust the 'divinity' of smiling, relaxed androgyny over the claims of an alpha male nutcase any day. And no, the feminist in me does not have an aneurysm at the thought of Lakshmi massaging Vishnu's feet. A loving, deeply generous thing to do - genders notwithstanding. To serve is not the same thing as to be servile!

Email ThisBlogThis!Share to TwitterShare to FacebookShare to Pinterest
Labels: Gods

'I'd trust the 'divinity' of smiling, relaxed androgyny over the claims of an alpha male nutcase any day!'

This is why David Bowie > Ted Nugent

i don't even want to think of what they'd do to the avatars. hoo boy.

if those muscles are a constancy in their visual style, Vaaman avatar probably looks like a motorcycle carburetor.

Sweet divinity is all fine but then perhaps the Vimanika guys wanted to portray a different picture of Vishnu... an angry God wreaking havoc on the evil forces with his trusted stead, equally menacing against the dark forces, by his side. I don't see this as kow-towing to DC. Of course, being used to the artwork of Amar Chitra Katha and growing up on demure images of Gods, it seems rather weird. But what's the big deal!

LOL... motorcycle carburetor! too good.
I liked what you said: serve vs. servile.
nice post. thanks,
window siller :-) :-)

indisch: a god does not always need to be benign - but, to use a popular western reference point, frodo and his allies do not start looking like orcs (physically or otherwise) in order to subdue them.

btw, Vishnu is the creator and not the destroyer indisch.

It's so bad to see that world-wild standardisation of what is supposed to be "cool" can affect beautiful stories. And who is really initiating something like that ? editors ? authors ?

@Amruta:
If they did when they were first conceived of, maybe you couldn't have used the analogy. :-)

@Anonymous:
Dude, Brahma is the creator. :-)
We are all creators and destroyers in our own ways. Even the Trinity. Btw, who do you think destroyed Ravana and Kamsa?

If Gods are simply projections of deluded human consciousness as some great archaeologists of the human mind have suggested, then you are going to have a real motley crew in your "heaven"; and indeed if you look at the Greek gods for example you wouldn't want to leave your mother in their care-there's a whole bunch of rapists, bastards(literally, i'm not being wantonly abusive), and jealous adulterers sitting up there.
Ergo, my unwanted advice for free o dear ones is:
forget the frigging gods and over -mythologizing and come back to basics-how to be decent human beings in indecent times. How to relate to the four elements and each other without creating mayhem etc etc.

Just lost twenty lines due to Indian internet weaknesses. So in short hats off to those who can glean A Book of Good Manners in the Mahabharat. I feel sure it is there. Point for me is that many folks get caught up in religious chauvinism through not going deep enough into myths. Hence i like the spartan-spare, not militaristic aspect!-in Krishnamurti's choiceless awareness and the Buddhist emphasis on raw experience as a result of reasoned and sensitive analysis.

How to pee in the right direction, how to share so your brothers don't eye your wife, how to twist logic to its most cunning extreme to justify a God taking sides in a war of mortals.

(No sarcasm intended) One cannot not love The Mahabharata.

@ Sugar Magnolia: Details like how to pee, and whom to covet need no elaboration/elucidation when one has dwelt upon larger matters of good behaviour :)

As for the other thing - it isn't God that needs to take sides - it is for the pawns/shrimps/minions/mortals to choose which side they want to align with! The war was always pointless. The importance of the tale lies elsewhere.

If one is to give up trying to be smartalecky, one must agree. :D

Do look up Shaonli Mitra's theatrical adaptation of the epic, if you haven't already. She's stopped performing it but it is available (albeit, greatly diminished)in translation: Five Lords Yet None A Protector

:) Wasn't trying to crush your point of view, just sharing my own. Thanks for the recommendation, and for the post.