Boatman Who Would Be Queen 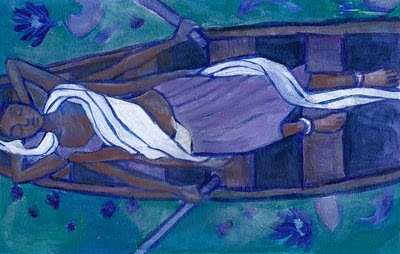 I just stumbled upon 'atlantis' on the forbes life magazine. I then found out that you were the author of the very very interesting looking 'kari' I had spotted at Landmark, but hadn't had the cash to buy.

So I looked you up and I love this! everything! congratulations.

Anruta, One needs to first read the Hindu mythological stories with the background knowledge in the present related to evolution of life known only through the west, ignoring the knowledge lost in the sands of time regarding hints related to evolution of life in Seawater from fish (related to Satyavati being called matsyagandha) and magarmachh or crocodile being considered as the most evolved fish, ie, number one avatar or incarnation of Vishnu the Nadbindu, source of sound energy 'Om', 'ॐ', that reflects Brahma-Vishnu-Mahesh, named thus based on the belief regarding the three-in-one functions of GOD: of creation, sustenance and destruction, for transformation!

That's funny, I just come back from a trip in India and I really wanted to draw a woman lying in a boat!This is the book to Arundhati Roy, who has inspired me. The God of Small Things.
I love your work.

'Hindus' considered as 'Truth' that only which wasn't changing with time in this ever changing world / 'Nature'...

And one can also get to see in 'Ramayana', the story related to Treta Yug, superior era compard to Dwapar Yug, the dialogue between a boat man (Kewat) and Lord Ram: conveying similar functions of the two despite the vast gap between their material statuses...:)

Superb Amruta! I love the illustration...

i absolutely love this! :)

Always loved Satyavati, she-who-smells-of-fish. How cool is that?